He was presented his winnings and introduced as New York’s newest lottery millionaire on Friday at Resorts World Casino in Queens.

Johnson said he was feeling under the weather on the day after Christmas but decided to go to work so he could collect holiday pay.

As part of his regular routine, Johnson filled up with gasoline at Arnold’s Service Station across the street from Iberia Foods, his place of employment. With the $5 bill he was carrying in his pocket, Johnson bought quick picks for his favorite games – Lotto, Powerball and MegaMillions.

He didn’t watch the draw or give it another thought until he was alerted by a co-worker the next day that the Powerball jackpot winning ticket was sold at Arnold’s Service Station. Even at that point Johnson was skeptical about his chances. “That’s not me man, that’s not my luck.”

Johnson did eventually go in and check the ticket on Friday of that week. He gave it to the clerk said who said congratulations after scanning the ticket.

“I needed to see it for myself, so I scanned and saw it read BIG WINNER.”

“I jumped up and down in the store,” he said. “I got right back in my car, turned my music up, and zoomed on home.” 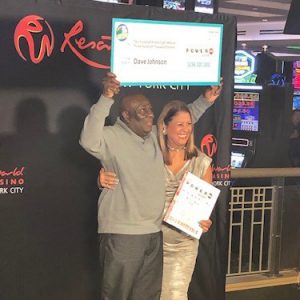 Johnson said it has been an exciting time since finding out about his good fortune. “I can’t even eat. I start and can’t finish my food. I’m happy with joy inside.”

Johnson has opted to take the $180,227,550 lump sum cash payout rather than the annuitized prize for his Powerball jackpot win. After required tax withholdings, Johnson takes home a grand total of $114,091,248.

Asked if he was going to continue to work, Johnson said no. “I quit right away. Right away no delay.”

Johnson, who is originally from Jamaica, said he plans to take care of his family, buy a red Porsche and a nice house.

He doesn’t plan to move far. “New York is my place,” he said.

This was the third time in 2018 that a Powerball ticket sold in New York state won the jackpot.

It was the first jackpot to be won since October 27  when Robert Bailey of New York and Lerynne West of Iowa shared a jackpot worth 687.8 million – the fourth-largest jackpot in U.S. lottery history.

WILL YOU BE THE NEXT BIG WINNER? PURCHASE AMERICAN POWERBALL AT LOTTERIES.COM HERE

Here is a list of all Powerball jackpots won in the calendar year 2018.