Exciting New Rules and Prizes for the UK Lotto 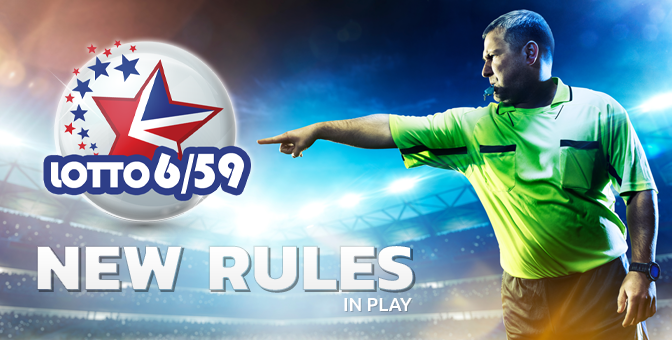 It’s a small change and a big change all rolled into one.

New rules have come into effect for all UK Lotto Draws from November 21st and onward.

Nothing is different about how the UK Lotto will be played. The format of the game itself remains unchanged. Players still select 6 numbers from a pool of 1 to 59. The cost to play remains the same.

The prizes being awarded to winners are climbing across virtually the entire board.

New millionaires now will be crowned for matching 5 numbers plus the bonus number. Even the prize for matching 3 numbers is going up.

Additionally, there is a new “Rolldown” feature too that triggers if the Jackpot isn’t won and rolls over for 5 consecutive draws.

Cash prize winners will now take home more prize money than before – even if they match as few as 3 numbers. Previously the prize for matching 3 main numbers drawn was £25. That prize has been bumped up to £30.

For higher prize categories (matching 4 balls or more), the winning amount used to fluctuate every single draw depending on the total number of tickets in play and the number of winners in each category.

These fixed prize amounts (with a special exception noted below) allow players to always know the exact amounts they are playing for when they purchase their play.

Just as before, the jackpot will continue to climb each draw if it isn’t won.

However, a limit of 5 draws has now been set for how many times the jackpot can roll over.

Rather than “rolling over” a 6th time until the next draw, the jackpot amount will “roll down” into the cash prize tiers below.

What this means is if nobody matches all 6 winning numbers on that 5th rollover draw – also known as the “Must Be Won” draw – the Jackpot will be shared by ALL cash prize winners and they will win an even bigger prize!

A Jackpot Rolldown could mean winning £100 for matching 3 numbers out of 6 instead of the regular prize of £30.

The Lotteries.com blog will certainly keep an eye on the UK Lotto jackpot and inform our readers of when the first big “Must Be Won” jackpot takes place. It will certainly be a draw not to be missed.

The winning Euromillions ticket sold for the Friday, November 2nd was purchased from a retailer in the Boston and Skegness Parliamentary Constituency.

Euromillions players in the region are being urged to make sure all their tickets have been checked in order to claim this massive £76,369,806 jackpot in time.

We’ve known since the draw date that that the UK had produced yet another lucky Euromillions jackpot winner but nothing beyond that.

For major prizes of £50,000 or more, the region in which the ticket was purchased generally doesn’t get released until approximately two weeks after the draw if no valid claim for the prize is received.

The ticket holder has 180 days from the date of the draw to come forward.

“We’re desperate to find this mystery ticket-holder and unite them with their winnings and we’re urging everyone to try checking in the pockets of clothing, in wallets, bags, down the back of the sofa and anywhere a missing ticket could be hiding – someone out there could literally be sitting on a fortune! We have the champagne on ice and our fingers crossed that the lucky winner comes forward to claim their win,” said Camelot’s Andy Carter.